A few months ago, Google finally introduced an interface for adding proper Google Street View submissions (getting a solid blue line, not just single Photo Spheres or Photo Paths). I have a friend diligently adding in off-road bike routes throughout the Chilterns. I saw a HUGE opportunity to "claim" an island!

So I did (in part at least)

In theory the submission process is simple.

I'd already been warned of a couple of little quirks. The GPX file cannot have any time gaps greater than 5 seconds (this is more of an issue than you think...many GPS trackers and phones will only capture a data point if a deviation of route or speed is detected, to save on data volume and battery). My Garmin has this option, however I had already overridden it and force a data point every second, as I also capture heart rate and power data, and I want that regularly and accurately captured. Insta360 do have a GPS remote that can embed GPS data into the video file itself, however I've been advised this is not great, can take ages to lock on, and shows a lot of inaccuracy and wobble (similar to what you see with phone GPS tracks, they are simply not very good)

Other issues I hit;
1) There is a maximum file size you can upload....seems to be about 20GB. I did a half hour capture, and the file size was 24GB (5760x2880/30 video at ~100Mbps). There is no validation in the upload tool, just just get a non-explanatory error that I worked out was something to do with a DB throwing a wobbly. I split the video file in 2, and also the GPX file

2) My camera overheated. I'm using an Insta360 One X2, which is bloody amazing...however the Maldives is 30'C in the shade on a cool day, and turns out half an hour of no airflow made it turn itself off. I had planned on getting an hour of capture.

3) The Garmin timezone and the camera timezone were unmatched. During the upload process Google complained that the timestamps of the video and GPX files were not overlapping. I think this was becuase I'd connected the camera to my laptop, which was on local time, while the Garmin was still on UK timezones. I ended up editing the GPX file to change the timezones to be +5 hours

4) I should have used a lower framerate. This one is 100% on me, I should have read the help pages. The camera only goes down to 24FPS, however even this would be a ~20% file size reducton.

5) I could have done with cleaning up the GPX file a bit. I'm always wary of editing GPX files too much, as it's really easy to balls them up entirely...I did have a little bit of jumping due to the overhead trees etc

6) I think I've uploaded the wrong GPX file with part 2. Currently only Part 1 is available, and Part 2 is still processing. If the thumbnail in the studio is correct, I attached the same GPX file (or the editing process was wrong...as I said, easy to muck GPX files up!)

7) Takes a bloody long time to upload 24GB of video! I'm wondering if it may be quicker in future to Handbrake a video to a lower framerate in future to have smaller uploads, though the risk of screwing up timestamps is there I guess. It's a shame the camera does not have a low frame rate option for StreetView capture.

We are definitely planning on going back, so next time I'll be more prepared, and do a series of 15 minute captures covering more of the island. I shall also practice on editing GPX files to get them a bit cleaner.

This is fucking amazing. I've just spent 10 minutes attached to the back of your head on a tropical island. That's not something I thought I'd ever write.

It's impressive tech. As I wandered (hark @ me! As if I was actually there) to the western sand bank, it seamlessly blended into individual photos. I also liked the little loop you did the to the north where you can see the chalets (correct term?) on stilts in the water. That in itself is extraordinary - how you can each have your own little world while there is another couple just metres to the side having the same experience.

Thanks a lot for this, although I was wondering if you could just pop back and do the rest of the island. Cheers.

Thanks a lot for this, although I was wondering if you could just pop back and do the rest of the island. Cheers.

Correct term is water villa, and they are lovely. We were in one of the slightly smaller ones, but they are still exceptional. For us, the experience of swimming/snorkelling off your deck, seeing sharks, rays, big shoals of fish literally metres from your room, and then coming back to the deck to rinse off in the hot tub with something from the minibar, is the epitome of luxury. 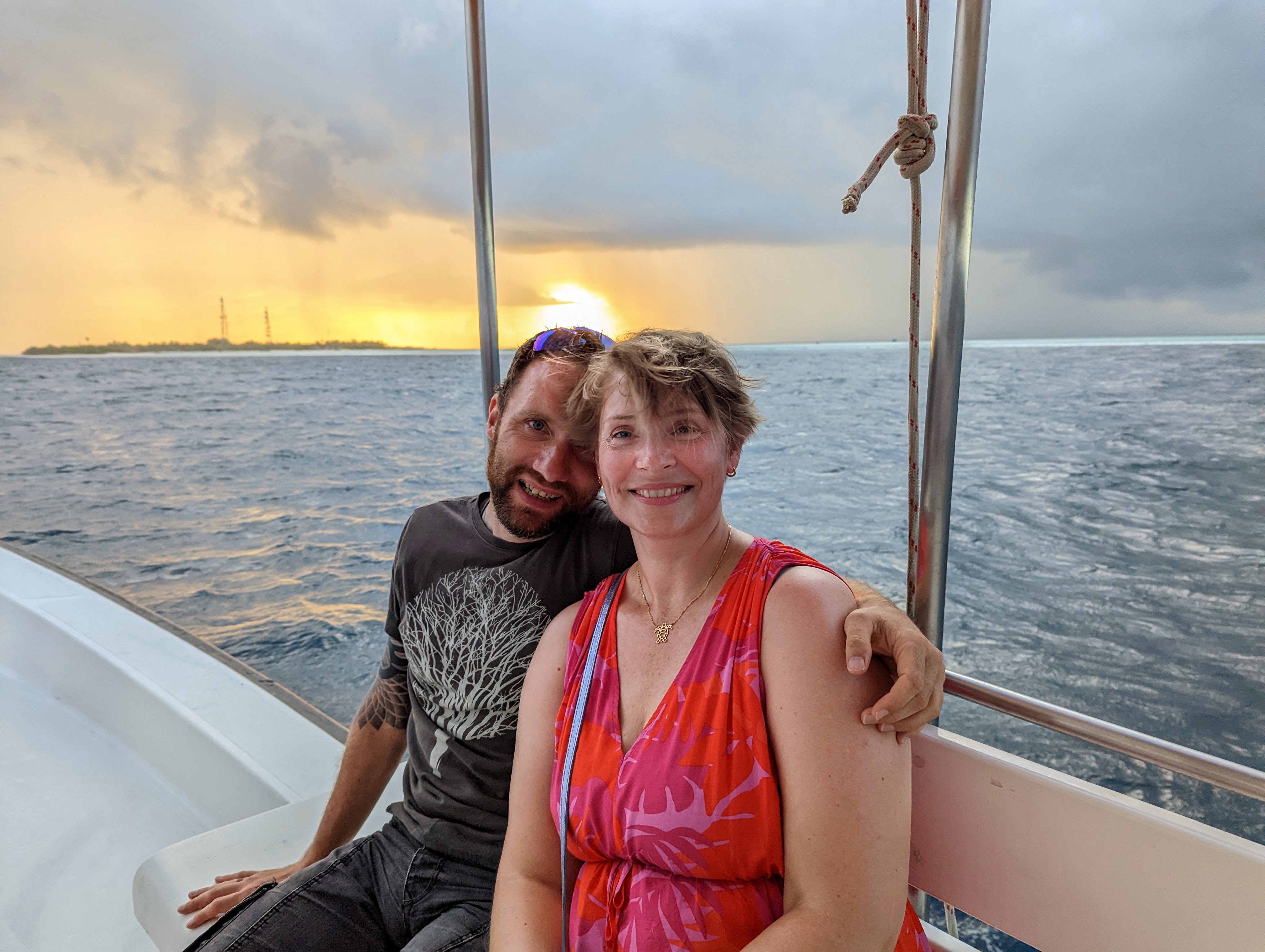 The remarkable thing about Kuramathi is that it's actually pretty big, and full capacity of guests is around 800-900 (speaking to the dive crew, they were at 600'ish while we were there...off-season), but you rarely see many people, with even the restuarants being quiet. There are some 2-bed villas with private beaches where families tend to stay, so they are sorted. Water villas are their own little world, and that leaves all the beach and garden villas the rest of the island to spread out and relax. We did a Sunset Cruise (an evening boat trip everyone gets where in theroy we go out and see the sun set over the island, but what actually happened is we had a 5-minute power shower, and everyone huddled in the metre square of awning cover while the blokes laughed at the women (who had all dressed up) getting rinsed) and were amazed they had 50+ people and 3 boats...honestly hadn't seen that many people the entire trip!

I worked out that ~100 leave or arrive every day...and what looks like an island paradise is actually a very, very well concealed evil overload base.
1) Lots of staff/henchmen
2) Has it's own powerplant
3) has it's own water desalination plant
4) has it's own hydroponic garden
5) Big comms mast, and 2 more on the neighbouring island
6) Has it's own hospital (legit, 2 german doctors on-site, and a massive recompression chamber)
7) Surrounded by sharks